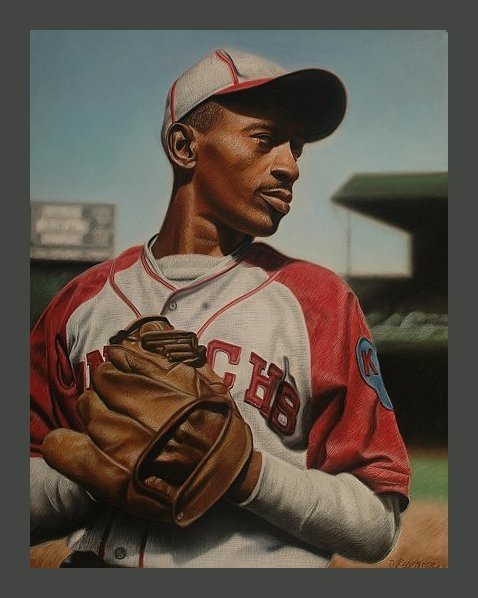 Paige was born July 7, 1906 in Mobile, Alabama. After being discharged from reform school in Alabama, he began his professional career in the Negro Leagues in the 1920s. The lanky 6-foot-3 right-hander quickly became the biggest drawing card in Negro baseball, able to overpower batters with a buggy-whipped fastball.

Paige, a showman at heart, bounced from team-to-team in search of the best paycheck, often pitching hundreds of games a year between regular Negro Leagues assignments and barnstorming opportunities. During the 1930s, Paige’s stints with Negro National League powerhouse Pittsburgh Crawfords were interrupted by seasons with teams in North Dakota and the Dominican Republic.

In the late 1930s, Paige developed arm problems for the first time. Kansas City Monarchs owner J.L. Wilkinson signed Paige to his “B” team, giving Paige time to heal. Within a year, Paige’s shoulder had recovered and his fastball returned. As he aged, the control he once used to dazzle fans now became his primary weapon as a pitcher.

“He could throw the ball right by your knees all day,” said Cool Papa Bell.

At the age of 42, Paige made his big league debut when Bill Veeck signed him to a contract with the Indians on July 7, 1948. Two days later, Paige made his debut for a Cleveland club involved in one of the tightest pennant races in American League history.

That summer and fall, Paige went 6-1 with three complete games and a save and a 2.48 earned-run average. Cleveland won the AL pennant in a one-game playoff against Boston, then captured the World Series title in six games against the Braves. Paige became the first African-American pitcher to pitch in the World Series when he worked two-thirds of an inning in Game 5.

Paige pitched for the Indians again in 1949, then spent three seasons with the St. Louis Browns from 1951-53, earning two All-Star Game selections. He then returned to life in the minors and barnstorming, resurfacing in the majors at the age of 59 in a one-game stint with the Athletics on Sept. 25, 1965. He pitched three shutout innings. Paige was elected to the Hall of Fame in 1971 as the first electee of the Committee on Negro Baseball Leagues. He passed away on June 8, 1982.

“Age is a question of mind over matter,” Paige said. “If you don’t mind, it doesn’t matter.”