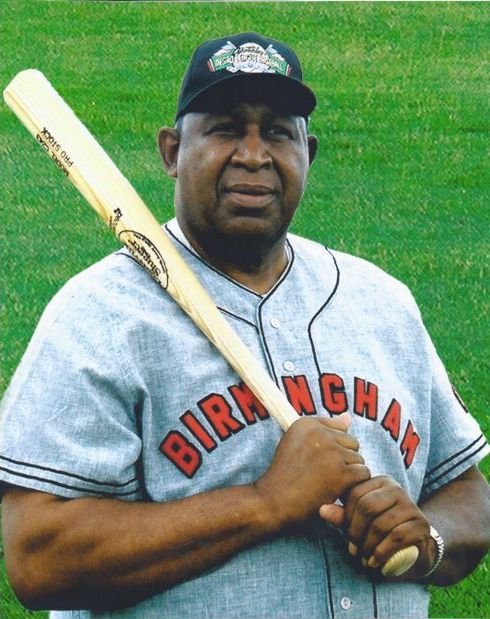 Carl  Long was born 1935 in Rock Hill, South Carolina. Long played in the Negro Leagues and minor leagues, showing good power, a shoulder injury ended his career at age 22. However after playing for a couple years in the Negro Leagues,  Long was recognized as becoming the first black player in the Carolina League. His father, William Long, played baseball locally including for the all-black Rock Hill Blue Jays. Carl remembers growing up in Rock Hill in the 1940s playing neighborhood baseball and watching the local all-white professional baseball team, the Rock Hill Chiefs. The Chiefs’ star player Dusty Rhodes, recognized young Carl in the stands from attending games and would play catch with Long after the games.

Major League Baseball’s color barrier was broken in 1947, some Negro Leagues teams began to cease operations as Minor League teams across the country began to officially accept the integration of players. One of those teams was the Philadelphia Stars of the Negro American League. The Stars moved to Nashville after the 1950 season, and in 1951 they recruited a 16-year old Carl Long to their roster. The Nashville team folded before the completion of their 1951 season. It was during this short period with the Stars that Long credits his manager and Negro Leagues’ legend, Oscar Charleston, for teaching him how to play in the outfield.

After his brief stint with the Stars, Long joined the Birmingham Black Barons of the Negro Southern League from 1952-1953. In 1953, Long was selected to play in the East-West Negro Leagues All-Star game, representing Birmingham on the East team. During his time with Birmingham, Long played alongside future Hall of Famer Willie Mays and future country music legend Charley Pride. One of Long’s opposing pitchers was Dennis “Bose” Biddle. Biddle recalled two notable hitters in the Negro Leagues during his time pitching Hank Aaron and Carl Long. Biddle and Long became best friends after retiring from baseball.

“Long hit a ball at old Comiskey Park in Chicago that probably is still going.”

– Bose Biddle on Carl Long hitting a home run off him.

After his 1953 season with the Black Barons, Long was signed by the Major League Pittsburgh Pirates. The Pirates assigned Long to the St. Jean Canadians of the Provincial League for the 1954 season. Long would hit .275 with 20 HR and 80 RBI for the Canadians, ranking 3rd in the league in HR. In 1955, Long split the season between the Phoenix Stars and Billings Mustangs. Then Long was assigned to the Kinston Eagles of the Carolina League in 1956.

Carl is recognized for breaking the color barrier in the Carolina League in 1956, becoming the league’s first black player, leading other black players to follow him and join the team. Playing for the Kinston, North Carolina team in 1956, Long would hit .291 with 18 HR and 111 RBI, which remains a Kinston team record. Long was again selected to the Carolina League All-Star team for his performance.

In 1957, the Pirates moved Long to their Beaumont affiliate in the Big State League. During the fall/winter 1956-57 season, while playing for the Tigres de Mexico of the Mexican League, Long injured his shoulder. The injury resulted in Long no longer being able to play baseball professionally. After leaving the sport he loved, Long and his new wife Ella settled down in Kinston, North Carolina.

In 1999, the Carolina League Kinston Indians honored Long by creating Carl Long Day which became an annual celebration of the Negro Leagues. In 2003, Long was inducted into the Kinston Professional Baseball Hall of Fame. In his later years, Long dedicated his life to working with youth and teaching the values of faith, determination and overcoming obstacles. Carl Long passed away in 2015, leaving his legacy in the hearts of Kinston, North Carolina.